Light Up The Night!

On December 15th, the Raymondale Annual Holiday Light Judging committee drove around and around the neighborhood taking in all of the shiny and bright lights of so many houses! It was not easy to narrow the choices down to first, second, and third, but after some friendly deliberation, the winners for 2012 were chosen.

First Place went to the home of David and Betty Hall at 7411 Brad Street. Their myriad of lights in their yard and a very clever Christmas countdown clock made all of the judges smile!
The photo is only of a portion of their jolly holiday yard and doesn't do it justice, but you can see the countdown clock! 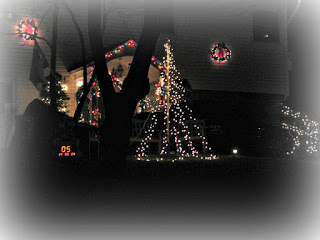 Second place was awarded to the home of Molly and Mike Katcheressian at 3320 Arnold Lane! Molly and Mike festooned their home with all white lights including a trio of trees and featured their lovely indoor tree in their front window. 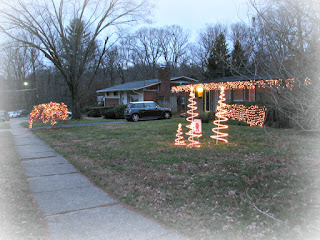 Third place was awarded to the home of Jamie and Polly Newton of 7409 Add Drive! Their holiday home was decorated with handmade buntings and a wreath of pine boughs intertwined with bright white twinkle lights. 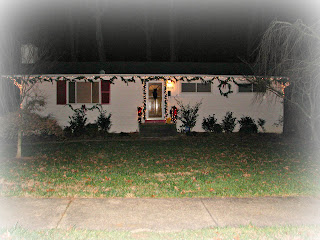 A HUGE thanks to all neighbors who decorated their homes this year making Raymondale so very merry!


Posted by Elizabeth Fedorko at 5:05 AM No comments:


The annual meeting was held in a meeting room of Thomas Jefferson Public Library  7 p.m. – 9 p.m. Refreshments provided by Raymondale board members. 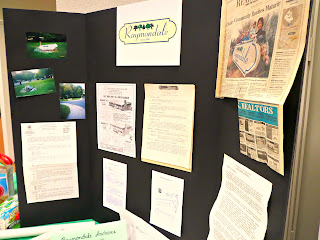 
Introductions of everyone present. 18 residents attended.
Year in Review by Whitney Redding, Co-President
The proposal by FCPA of a new trail in Luria Park is now defunct. All residents agree that the FCPA should take care of trails and bridges that are there now.  FCPA is  supposed to fix/replace the stream bridge in Luria Park and has given it a “high priority”. Surveying has been done,  but no start date has been announced.
The Raymondale Environmental Stewardship Taskforce has worked to remove invasive plants this past spring. Removal of invasive plants promotes floral and fauna diversity. Many volunteers from other neighborhoods and organizations removed 60-70 bags of brush from the small park near the intersection of Brad and Dye. Another invasive plant removal is planned for Spring 2013.
Annual National Night Out at Woodley Pool in August was a success and well attended by many Raymondale and Broyhill Park residents as well as the police with their squad car for the children to see.
Due to low attendance there will be no more neighborhood wide  yard sale.
Thanks goes to members of the Environmental Task Force for their vigilant activity with the BRAC (Tricare) impact on traffic, land, etc. Photos of stream dumping were taken and reported to the proper authorities. As a result, the developers were forced to follow correct environmental rules for stream preservation. A traffic study was scheduled for this past summer (after school let out); not sure if it has been accomplished. Illegal U-turns on Jaguar Trail is still a big concern.
Raymondale Sign by Whitney Redding, Co-President
There was originally a Raymondale a sign in 1960 made of masonry. In 2003 the newer sign was destroyed by an uninsured motorist. Raymondale resident, Pete Eldred made a copy to replace the destroyed sign. The replacement sign is now deteriorating. The RCA board is pursuing a proposal for a new sign that will keep the integrity of the original sign and be weather resistant. The new sign will be illuminated at night by solar lights.  The bid by sign company (Kirby Newman of Fast Signs) is $4585 including installation. There is a past recorded easement in Fairfax County for a Raymondale sign to be located in the place of the current sign. The Raymondale board will continue to consult with the property owner and  have an attorney (possibly a George Mason Law School student who could do pro-bono) look at the old easement document to confirm that it is still valid.  Separately, it appears that insuring the sign against future damage is not currently possible since Raymondale Civic Association is unincorporated. The board will seek counsel from original attorney of most recent sign (2003) concerning this and other sign issues. Currently the Raymondale Civic Association  has $4700 in the treasury. All present at the November 28th meeting, but one, voted in favor of the sign being replaced. 17-1 in favor.
Per members’ suggestion, a flyer will be distributed to all Raymondale residents as soon as possible, describing the project  and requesting additional donations.
The majority present voted to use the money we have on hand to get the new sign and then use rest of the monies raised to add to the treasury as a reserve. Another suggestion was to let residents know how much more is needed for the sign and solicit for that amount along with a picture of the new sign.
.George Mason Law School (Arlington) may have students who could do pro-bono law for Raymondale sign issue.
Real Estate by Sandy McConville, Co-President
No homes currently on the market in Raymondale. Fairfax County currently has a low inventory of available homes, 2 months’ inventory of homes available.  Homes don’t stay on the market long. Usually less than 30 days. Price range is $380,000 - $435,000 in the Raymondale area. No recent (last year and a half) foreclosures.
Elections
Solicit for new board members, nominations. None presented
Nomination of the current slate as a whole. Unanimous approval to keep current board members.
Blog by Beth Fedorko, Secretary
New Raymondale blog created: www.raymondalefcva.blogspot.com
Beth Fedorko will run blog. The purpose of the blog is to post neighborhood announcements of events as well as snippets of history, photos of interest to all (eg. wildlife in yard) on a weekly, bi-weekly basis in a more expanded format than the list serve and on a more timely basis than the current website. A blog is like a website, just more current and up-to-date. If any neighborhood resident has anything of interest to post on the blog, please contact Beth Fedorko at ehfedorko@peoplepc.com . The Raymondale list serve will remain as a place for neighbors to post their own announcements of  lost pets,  handyman recommendations, etc.
Meeting adjourned at 8:30 p.m.

And...Mark Your Calendar!
Raymondale Annual Holiday Lighting Contest!
Judging will be the weekend of December 15 and 16. So light up the night! Prizes will be gift cards from MOM's Organic Market and Angelika Cinema both at the new Mosaic shopping and dining complex in Merrifield! If you are interested in being a judge, please contact Beth Fedorko ehfedorko@peoplepc.com.

Posted by Elizabeth Fedorko at 3:46 AM No comments:

Raymondale Civic Association's annual meeting will be 7-9 p.m., on this Wed., Nov. 28 (light refreshments will be served)


Who will be there: Your neighborhood :)

All Raymondale residents are invited to attend the civic association's annual meeting to discuss neighborhood concerns, nominate someone for the board, elect officers and get to know their neighbors. ANY resident of Raymondale is welcome to attend; it's a great way to plug into all the latest goings-on. We usually hold it at the Leis Center. Please note that this year, because of new ongoing night courses for teachers at the Leis Center, the location has been changed to our beautiful newly renovated library. To accommodate those coming from work, we'll be hosting it 7-9 pm with light refreshments provided by the board members, rather than a potluck. Children's activities also will be provided, and there is no fee for this event.


This meeting is very important for keeping in touch with what neighbors are thinking. Among the topics on the docket will be the status on replacing the Raymondale sign; the status of the new bridge into Luria Park; an environmental task force update, and other information of relevance to our neighborhood. Bring your questions, vote for the new board, consider becoming a volunteer, and we're off and running!

Posted by Elizabeth Fedorko at 4:59 PM No comments:


Raymondale is a neighborhood of 142 homes situated in the gently rolling hills of Falls Church, Virginia.
In 1955, Westwood Properties, Incorporated surveyed what was once forested land of oak and poplars with Holmes Run Stream meandering through it. The L-shaped plot of acreage was an ideal location for a neighborhood to be built to provide affordable and comfortable homes for the myriad of young post-World War II families coming to the Washington, D.C. area for job opportunities in the military and various government agencies.
Raymondale was created over the course of several years in the mid-1950’s in seven sections of development. Several different styles of homes were offered to prospective and eager buyers, all of them reflecting the open plan casual and family-friendly attitudes that were so much a part of post-War living.
Brick ramblers by architect A. B. Lowstuter, called the “Mark II” (featuring the “Teen Room”) and the “Mark III” (featuring “Center Hall Plan”), promised among other amenities, Hotpoint kitchens in the “new pastels” with dishwasher, disposal, 11 cu. ft. refrigerator, and an oven which featured a rotisserie. Cathedral ceilings, glass gables with wide overhangs, and the careful blending of brick and wood were characteristics of these homes which line much of Brad St., Sheffield Court, and Add Dr.
Another open-plan rambler, “The Raymondaire”, was a smaller option built on a slab with large picture windows, sliding glass doors, and attractive low roof lines are featured on Carol Lane, Brandy Court, St. James, and part of Brad St. The Raymondaire echoes the Frank Lloyd Wright Usonian style of architecture, an affordable style the renowned architect developed after the war so all families could live in homes that had few interior walls and large windows letting in lots of natural light.

Posted by Elizabeth Fedorko at 6:28 AM No comments: